One of the many rumours spread against Joshua Ek and The Josh Show was that HE (Joshua) accused Onision of rapeing a minor in Scotland.

The Josh Show simply reacted to a livestream where the allegations were made, explained to his own audience that they were claims and that they would have looked into it.

On the 15th of August 2017 Onision's ex moderator and friend, TallVideos, during a livestream (archive), released alleged details of Onision's personal life, more precisely a private conversation they had on Discord.

After the livestream Joshua privately spoke about the rumour with TallVideo in order to collect as much information as possible to conduct an investigation into his claims.

To keep in mind: an investigation was needed as claims do not require the claimant to provide evidence or proof.

One of the most known people Joshua was advised to talk to was Kaitlin Abercrombie, one of the most active and well known personality in the Anti-Onision community at that time.

During this first conversation Joshua simply asked whether Kaitlin knew about a certain Katie Duncan. She then invited him into an Anti-Onision Twitter Chat Group to talk to other members of the Anti-Onision community, but soon left due to the immaturity of the people present at that time.

During that short experience, the "Katie Duncan" name was "misused" by Kaitlin and the people in the Twitter Group Chat, and that's when Joshua, worried, and stepped back... 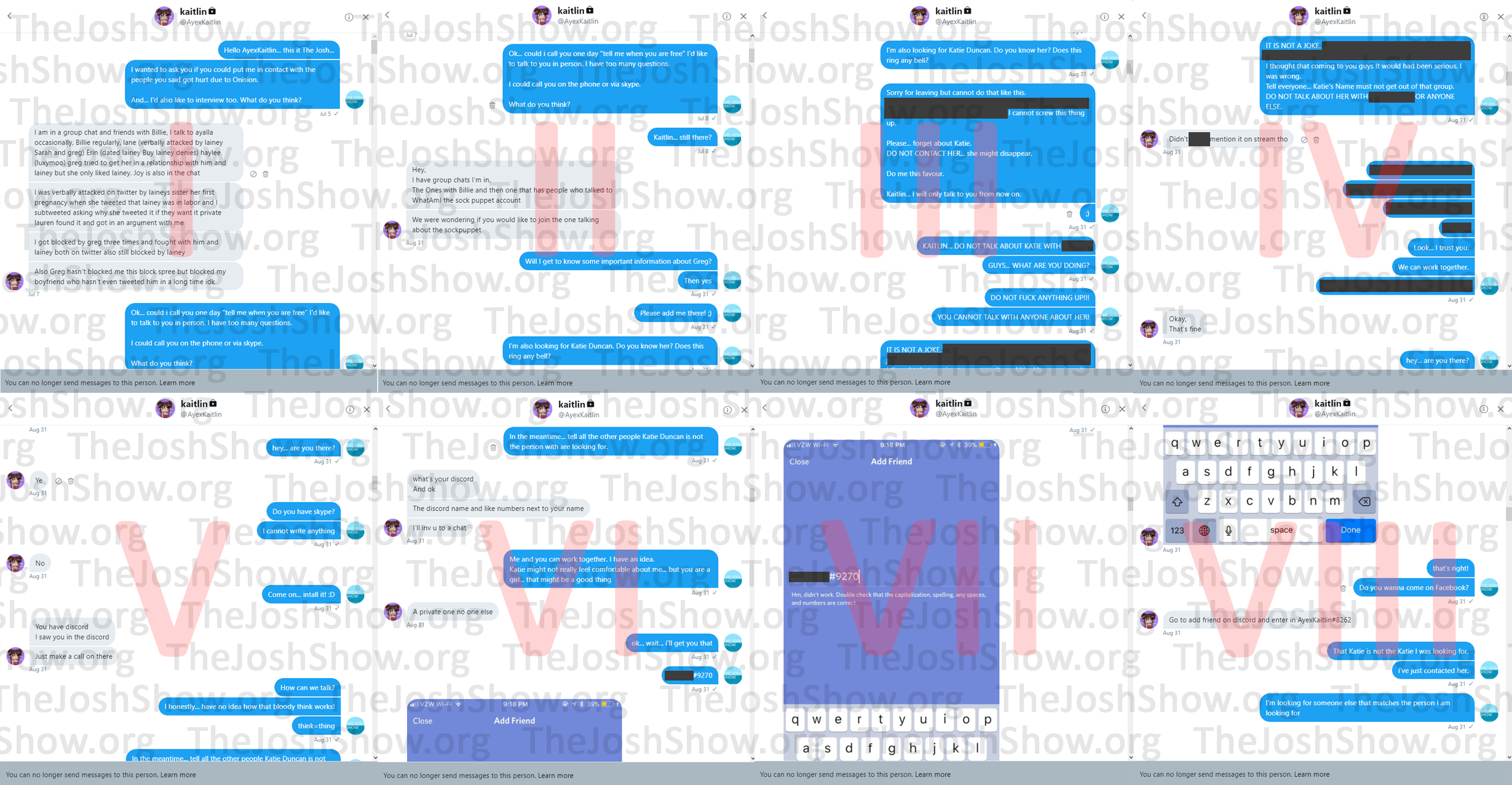 Image: TheJoshShow.org
To avoid distractions, all unrelated information have been blacked out. But are shown in other pages when they become relevant.

Image I: July 05, 2017 - Kaitlin Abercrombie was well known in the Anti-Onision community, and many advised Joshua to get in touch with her in order to collect more information about Onision.

Image II: August 31, 2017 - 16 days after Tall Videos livestream, Joshua was again advised to get in touch with Kaitlin Abercrombie to find possible Onision Fans named "Katie Duncan". At this point of the encounter Joshua is invited into an Anti-Onision Twitter Group Chat.

Image III: After a few minutes in, Joshua leaves the Anti-Onision Twitter Group Chat disappointed of the behaviour of the people present, and how the name "Katie Duncan" was being misused.

Image IV: "Did ███ mentioned it on live stream though?" Joshua failed to recognize this sentence as a red flag, and carried talking to Kaitlin Abercrombie trying to control the damage, see what her contact was like and end the communication right after.

Image V: Katie Abercrombie and Joshua try to find a way to Voice-Chat.


Image VI: Joshua asks Katlin Abercrombie to fix the damage occurred in the Twitter Group Chat a few minutes earlier, where the name "Katie Duncan" was misused. Asking her to tell everyone "Katie Duncan" was not the person of interest anymore, even though at that moment, she still was.


Image VII: Joshua tries to connect to a Discord server using a throwaway account made in that very moment [read more] but fails, so they move to Facebook to Voice-Chat. They both talk and it is in this very moment that Kaitlin Abercrombie illegaly records the entire conversation between her and Josh, conversation then used to Blackmail him... [read more]

Image VIII: After reaching out to the "Katie Duncan" Kaitlin Abercrombie advised him to contact, Joshua ends all communications with her. Unfortunately this was just the beginning.

What was Joshua's attitude towards the claims and possible leaks? Did Joshua spread the rumours like Kaitlin and her group of slanderers claim he did?

When in December 23, 2017 Kaitlin Abercrombie and fellow Slanderers launched their attack at The Josh Show and Joshua's private life on slanderous website lolcow, this was one of the rumours they tried to push: "Joshua Claims Onision Raped a Minor"

While accusing Joshua of not being able to provide proof, they themselves failed to provide ANY data that Joshua was responsible for the spreading and/or creation of those rumours.

Before looking into WHO spread those allegations, it's important to understand what was Joshua's attitude towards any leak of any nature about those claims (video below). The audio below was not recorded by Joshua, but was illegaly recorded by Kaitlin Abercrombie and then leaked during a blackmail and intimidation attempt [real more]

Joshua feared leaks of any nature and at the same time, he failed to recognize red flags in Kaitlin Abercrombie's behaviour... but he NEVER spread any rumour and/or false claim against Onision.


SO WHO SPREAD THE ONISION AND JOSHUA RUMOURS?

After Kaitlin Abercombie successfully tricked Joshua into talking to a contact she previously reached out herself and illegaly recording him in August 31, 2017, Kaitlin went ahead accusing Joshua of spreading the rumours by simply convincing her own group of slanderers.

She did not provide any data for such claim. She simply said so. Her friends trusted her and slowly spread the rumour even further. 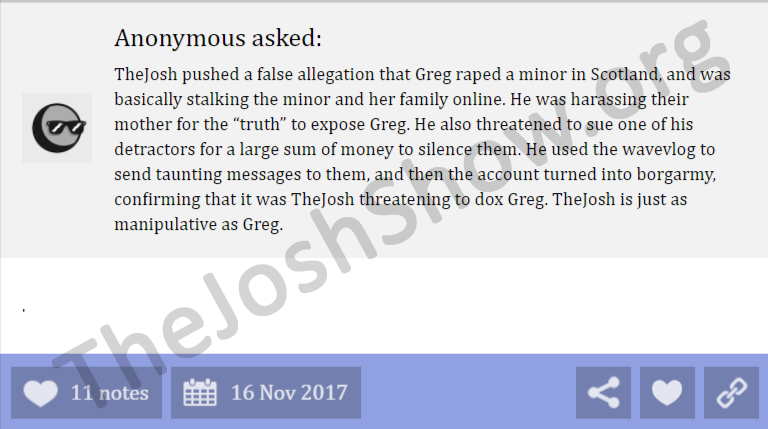 Image: tumblr screenshot - The account associated with this thread has been deactivated but all the posts have been collected.

The above image was found on an Anti-Onision Tumblr blog by one of Joshua's researchers.
The original poster has been identified.

Novermber 16, 2017 is the moment the rumour linking Joshua directly to the claim TallVideo made on August 15, 2017, was being publicly spread by Kaitlin Abercrombie and her group of slanderers.

But while Kaitlin and her friends were trying to frame Joshua for things he never did, and at the same time were trying "take down" Onision, they also turned to him for advices... [read more]