Kaitlin Abercrombie claims to have witnessed Joshua B. Ek ( The Josh Show ) spreading feces inside his daugther genitals in a video on the YouTube platform

The following screenshot shows how the image has been censored to trick the casual viewer into believing that behind the red rectangle, the child genitals was positioned in front of the camera. In reality, the child was positiond in the opposite direction of the camera and the few times something become visible, Joshua B. Ek (The Josh Show) added filters (blur + magnify x4000) to cover the child's private parts.

The rumour "Josh show's his daugther's private parts for Pedo views" was kickstarted by Youtube and Twitter User Glesga_Lassieand then spread and twisted into "Josh spreads feces inside his daugther genitals" by friend harassers. 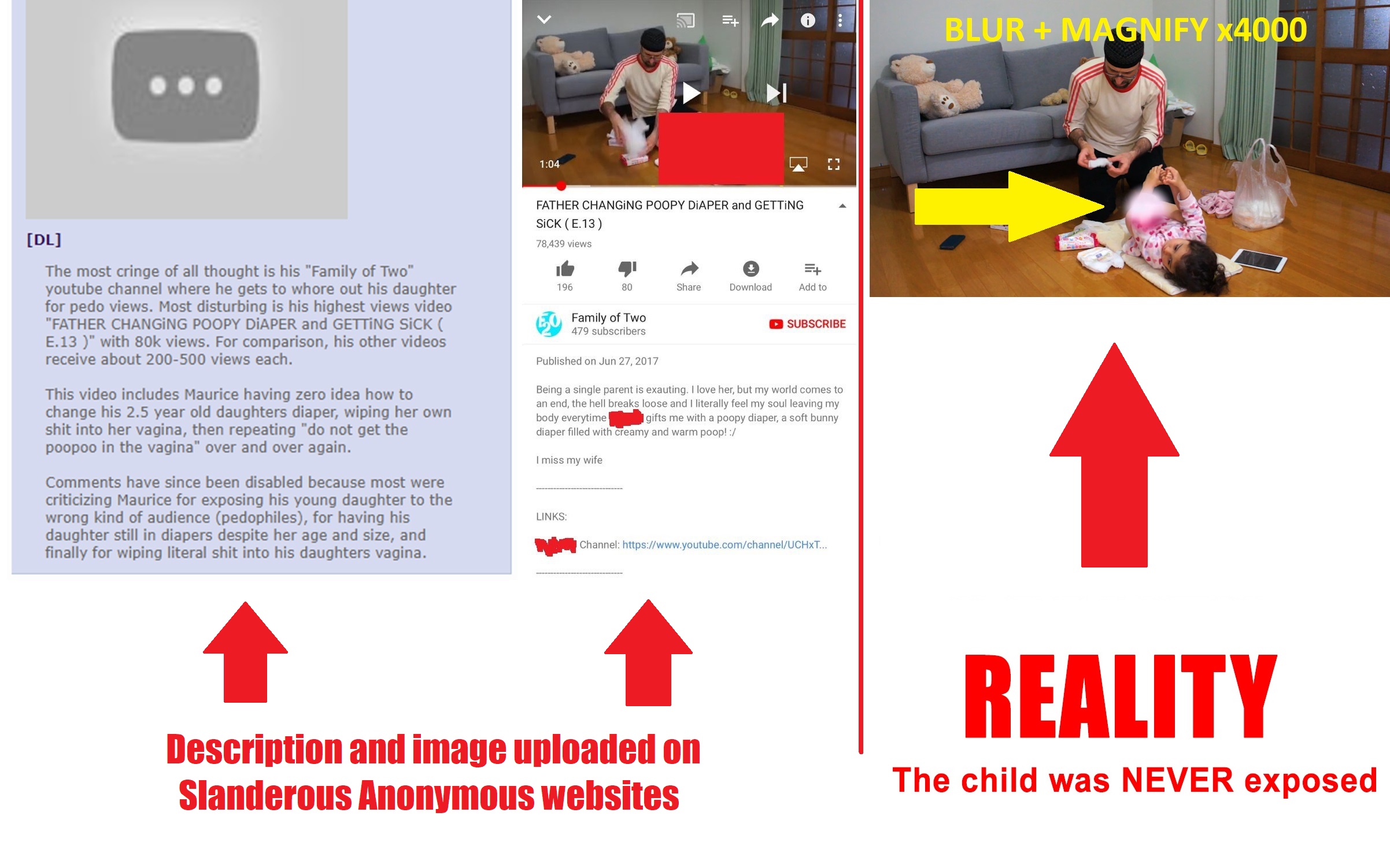 So, Where Does The Rumour Come From?

A transcript of the video (the same video given to lawyers and police in October 2017, following the blackmail attempt, 2 months before the rumour was even created) gives an idea of where the harassers started building the slanderous rumour from.

During the video, in which the child's private parts were never exposed, Josh says that the worst part for a parent, according to him, is when feces are soft to soft-liquid.

Josh also talks about the "communication" between parent and child, and the importance of it (according to him) during the changing of a nappy.

Kaitlin Abercrombie, together with fellow slanderers also point to the use of the word "vagina" to indicate an insane obsession for the child's private part. But in the english language, a language Josh studied for years as a second language, the words "vagina" is the correct word to describe the visible part of the female reproductive system, so it is hard to understand Kaitlin Abercrombie and Slanderer friends' thought process (see note below).

Joshua B. Ek (The Josh Show) and his Lawyers have been silently waiting months for the fill file to be released to the public by his harassers to disprove all rumours. The full video was uploaded by one slanderer/harasser (identified) on gore website LiveLeaks. Lawyers have reached out to the website to collect all details.

NOTE: The video was made in the spirit of a family vlog/channel, where Joshua vlogged part of his private life and shared it with his community.
A simple Youtube search can show how many similar videos have unblurred kid's genitals available to anyone, while Joshua's video has been blurred for the whole lenght of the video and the child positioned 2 meters away from the camera with the head of the child front first and not the other way around, as 99% of the videos on YouTube. The child's private parts have NEVER been anywhere close to the camera.

The following video is a live video screenshot of the uploaded file by harassers on gore website LiveLeaks.


After the video was released some harassers agreed the clip was not as bad as they claimed, proving although they never watched it they were ready to slander a complete stranger for pure fun driven by sick mob mentality.

Others kept pushing the rumours, and even lying about the comments made by Joshua (wrongly called Maurice by the harassers) during the video.

The following messages show how deceptive, manipulating and liable these comments are.
The lies are still pushed out and shared to cause personal and financial damage.

"She's gonna have all sort of mental issues"
There's never been a case of a child that has suffered mental traumas of any kind following a family vlog blurred video filmed 2 meters away from the camera where nothing has ever been shown, nor this has ever been suggested by any medical professional.

"Was it painful? Was it hot?"
During the video Joshua B. Ek (The Josh Show) explains how hard changing a nappy is for a single father, and that communication is vital between father and child. While the sentence "Was it Painful?" (which is a normal thing to ask to a kid like "Is the nappy too tied" or "is the tissue scratching you?") has been said, the sentence "Was it Hot?" has never been pronounced in any part of the video, indicating intent to paint a normal situation in the worst possible way.

"Repetedly wipes up into her vagina"
This is too not true. The wiping up movement was made on the bottocks area (or clunis in latin) and not on nor into the child's vagina.

"There are definitely part of the video where she's not being blurred out"
These part is when the child's private parts are not visible, therefore blurring was not necessary.

"Says he needs to watch YouTube tutorials even though..."
Only two harassers are mothers while the others are between 20 and 30yo unemployed people unaware of the difficulties of having a child. Watching tutorials, asking doctors, listening advices is part of the parenting experience and should never be excluded as a method of learning.

The rumours are still being spread and people are being contacted privately by the same slanderers.
We are currently collecting all data from websites and people, screenshots, pdf, videos, audios and private messages to prove persistent and malicious intent.