The Slanderous tweet made by self-proclaimed Onision victim Elizabeth Reilly ( aka @DrowsyLane, Lane1313, LizzepopLiz, Lizzie ), came out of no-where as Joshua Ek never personally interacted with her, nor the thread her false and life-ending accusations where made in, had anything to do with Joshua."

The same kind of false claims were spread by Elizabeth Reilly's good friends Kaitlin Abercrombie and her group of Slanderers (@DrowsyLane's Following List), the same people that decided to upload "the alleged abuse video", a family friendly vlog, on a GORE website to attract pedophiles and nasty commnets.

Meanwhile, slanderous and dangerous actors like Elizabeth Reilly (aka @DrownsyLane Lane1313, LizzepopLiz, Lizzie ), still enjoy spreading it as truth, very well aware of the consequences these false statements can do to someone's life.

The thread was originally about another YouTuber, RealStreamNews. All of a sudden Elizabeth Reilly ( aka @DrowsyLane, Lane1313, LizzepopLiz, Lizzie ) stated RSN supports Joshua Ek and therefore he's a clown.

Joshua Ek expressed his disappointment to RSN, directly and privately, as it is expected to be done. He never talked about his past friendship with the creator and believe talking about the allegations against him would be inappropriate.
Whatever Joshua opinion is about RSN, the creator is aware of it.

It's also important to point our that RSN and Joshua stopped talking for more than 6 months at the time Elizabeth Reilly's tweet was published to the masses.

Joshua has been clear multiple times about this, he wants no part in whatever RSN does, and can “ONLY” wish him well.

That’s PLAIN FALSE too.
Joshua's original slanderer, Kaitlin Abercrombie, and a friend of hers took that rumour, spread it and accused Joshua of it.

The following recording can clearly show how much worried Joshua Ek was of talking about it.
Joshua stated: "I spent money and time to find out the truth and I do not regret anything I have done in regards to that."

This recording was recorded by Miss Kaitlin Abercrombie and then used in a Blackmail attempt. Joshua and associates were told she would have shared the audio with Onision. They ignored her threats and requests and eventually the audio was release publicly for a few hours on Twitter in an intimidation move.

All info can be found here: Blackmail and Threats

Back in 2017 The Josh Show Team talked about this particular rumour and their experience in these two updates because they thought it was important to have Onision exonerated from it and also explain the relentless attack they were and still are subjected to (Archived too in 2017).

"For the past two years we’ve directly asked, and still requesting data from various websites & will address “ALL PEOPLE” involved.
Remember and always make sure you understand that “LIFE-ENDING FALSE STATEMENTS” have serious real-life consequences for “EVERYONE INVOLVED” not only for the person falsely accused.
The Josh Show isn’t the only news channel I run, support or help. All people I work with know FIRST HAND how much I value data and how much I discourage everyone from making false statements.
We provide documents, videos and audio recordings ALL THE TIMES, and contact authorities if and when needed."

"How would you defend YOURSELF from these life-ending false allegations?
We've decided to reply to all these dangerous actors accordingly and with the respect they deserve.
I DO NOT and WILL NOT take lightly any Slanderous Statement aimed at damaging or destroying “MY FAMILY,” hurt my child, and/or paint me as “PEDOPHILE,” which is clearly what these people have been and are trying to do.
The bond between a parent and their kid is sacred.
My kid is all I have. And you are putting venom into it.
I will not engage in this kind of trolling and/or vendetta games and I will do my best and all I can to credit all people involved as I’ve been adviced to.
This has become a real life problem, it is mentally and physically exausting, therefore I will not refrain myself from naming all people involved in this criminal activity.
"You are responsible for the things you say."
With Love,
Joshua B. Ek" 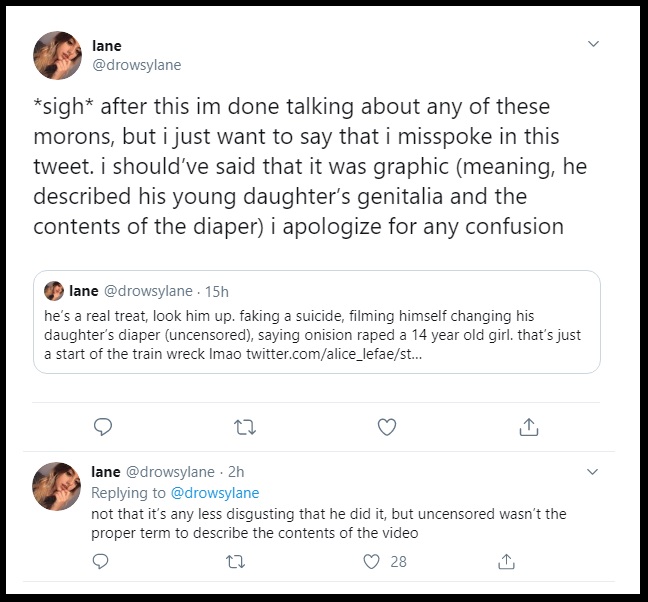 
Not a single word "DESCRIBING" JOSHUA's kid's genitalia has EVER been mentioned in any video EVER published in any of his Channels, written in any of his websites or ever written on the internet or on paper. He's also NEVER alked about her genitalia in private conversations with family members, friends, strangers or even doctors, on the internet or privately, by voice or in writing. Ever.

All info can be found here: Smear Campaign

"Attaching anyone's name to these kind of Life-Ending Slanderous Statements can have everlasting repercussions in anyone's life.
This 2 year long Smear Campaign has been Mentally, Physically and Financially challenging and I will not take anything said aimed at damaging my Family and/or depicting me as a Pedophile (supporter or sympathizer or any other link to such community or any other community that damage children) lightly.
I will directly address and credit this person's false Statements, Allegations and Claims with the respect she deserves, independently, as already arranged by updating this page and the website listed above.
Joshua B. Ek"

While Miss Elizabeth Reilly's Twitter followers (well over 4,000) believed her words without doubting her sincerity and honesty and Joshua's life got even more complicated after these false slanderous statements, some of my 300 Twitter followers, PEOPLE THAT HAVE ACTUALLY WATCHED THE VIDEO IN QUESTION, reacted with the following comments: 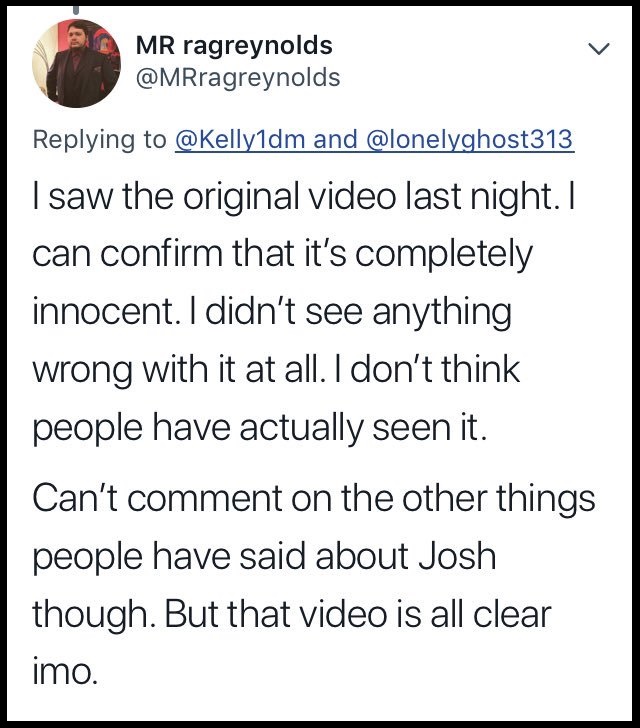 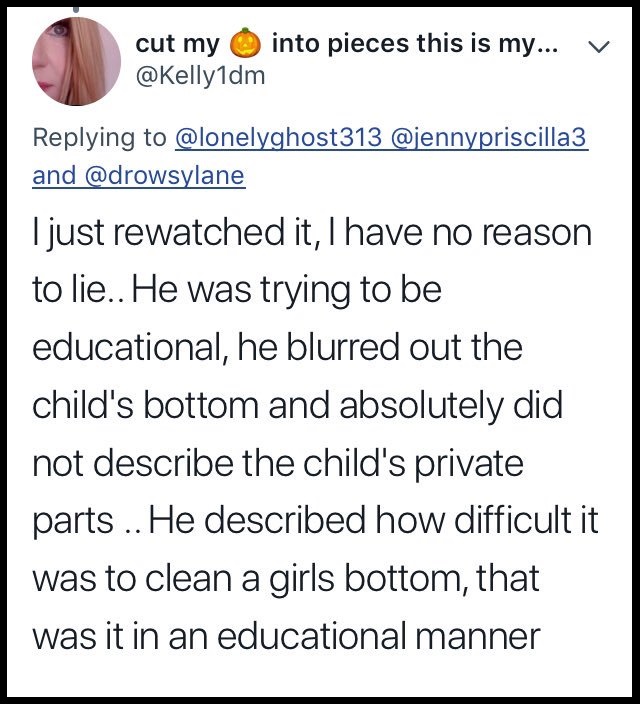 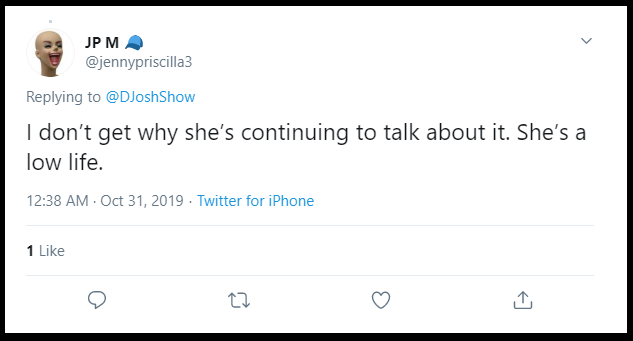 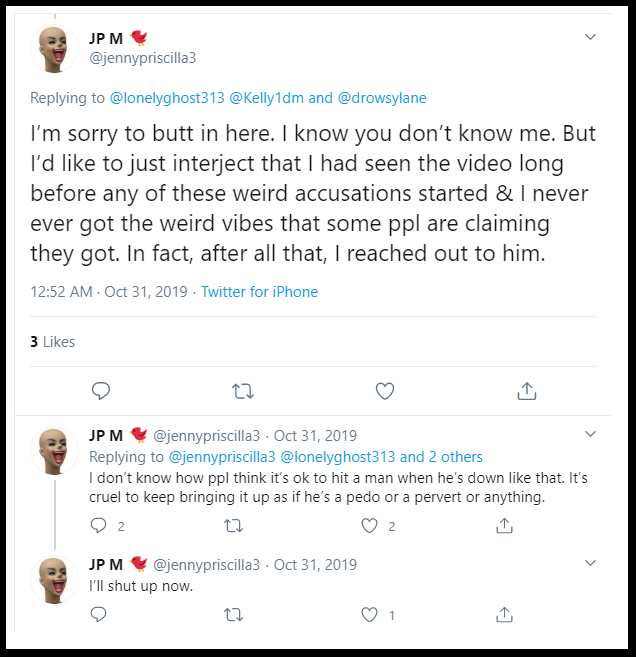 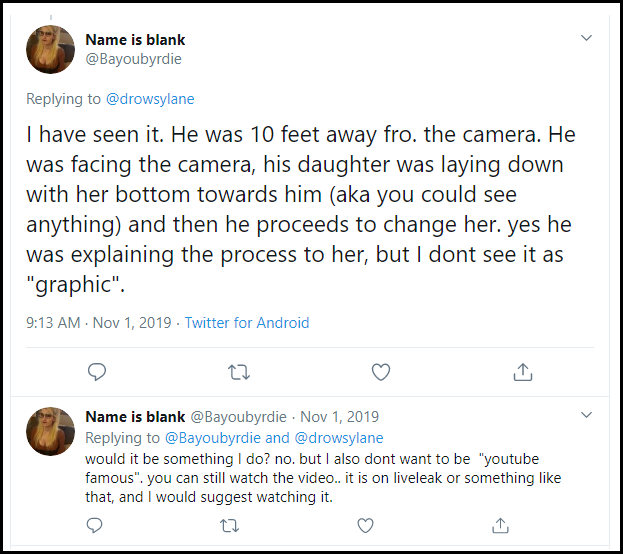 "The comments Elizabeth Reilly ( aka @DrowsyLane, Lane1313, LizzepopLiz, Lizzie ) made came out of no-where. Although my team brought to my attention Miss Reilly privately made snide remarks towards me, I've never personally interacted with her, nor the thread her false and slanderous comments where made in, had anything to do with me.
It's obvious Elizabeth Reilly has NEVER watched any video of my vlog channel but simply heard what my original slanderers (who's currently friend with) reported to her (lawyer has been informed) and spread two false statements to damage me and my family.
Clearly, there is a deeper and more serious problem to address. There's a lack of empathy, remorse, and understanding of the gravity of these false statements, that in my case, are already having repercussions in my life, affecting personal and business relationships." 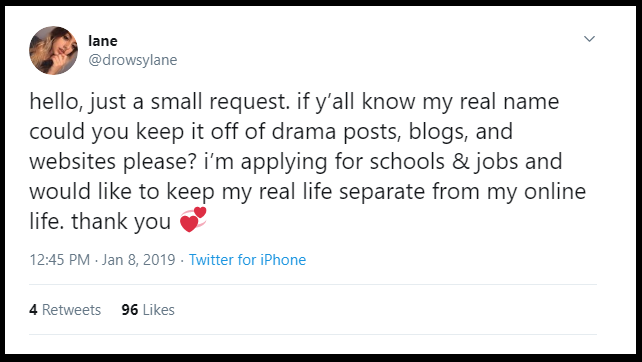 
"It is also very interesting to notice how careful she is when it comes to her own reputation, requesting everyone to not use her legal name, while accusing people of the most horrendous crimes. A very interesting double life to which she applies unfair double standards.
Joshua B. Ek"