This Audio Recording was recorded by Kaitling Abercrombie and then spread via Tweet using a fake account created in January 2015, called @slaughterhseone (archive).

The user tagged the Josh's Twitter Account in a public tweet with downloable full version of the video used in the frist blackmail attempt about 1 month and a half earlie. This move was meant to be an intimidation into submission for retraction of a video about the harassing campaign and harassers meant to be realeased and eventually published the day after, on ‎November 27, 2018.

Because the only person to have access to the original recording, uploaded on a Google Drive account was Harasser, Slanderer and Blackmailer Kaitlin Abercrombie, it is fair to assume this account belongs to her. 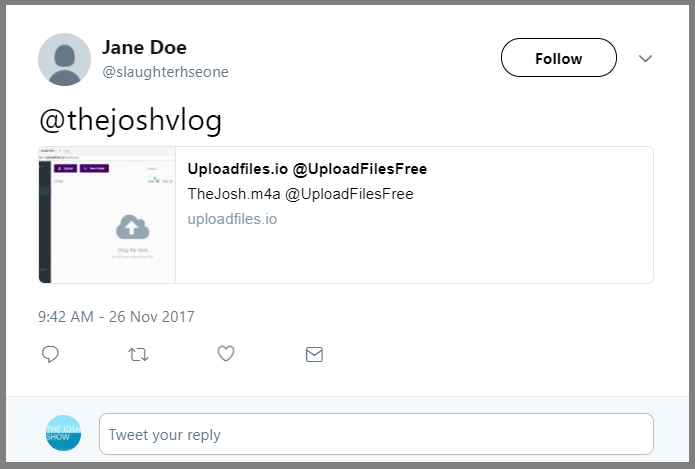 Image: screenshot by Joshua B. Ek (The Josh Show)

After the intimidation attempt, the account has been used for a short period of time to harass YouTuber Onision.

Important to point out, Kaitlin Abercrombie set the account's location to Seattle, WA, to indicate and blame Youtuber Onision for the Blackmail attempt and/or release of the illegal recording.

Today the account, although still active, is virtually unused.

Over the past 18 months we've collected enough data to prove Kaitlin Abercrombie and her Team of Slanderers are still privately spreading rumours, sharing fake data and still slandering Joshua B. Ek ( and The Josh Show ).

All data will be published every time it is required.